From Mason to Minister

An adventurous, captivating, and poetic memoir of the author’s courageous and spiritual journey—from Scotland to Canada to Australia—in his quest to “find the Truth and know the living God.” Neither an apologetic nor a polemic, he corrects much misinterpretation and misunderstanding of Freemasonry. We learn how inspiration from Masonic teachings about Solomon’s Temple, the arch, and keystone led him to a deep study of the revelation from the Bible of the “stone the builders rejected,” which is Christ. Readers will be uplifted, inspired, and delighted as they follow along with him in the discovery of his calling to become a minister.

WHAT READERS ARE SAYING

I began reading this book hoping for some interesting information to give my husband showing how Masonry is inconsistent with Christianity…[but] it’s mainly of the author’s journey as he travels the road of evolutionary belief, seeking out something higher, and finding some of his answers in Masonry and ultimately becoming a [Christian] minster no longer involved in Masonic teachings…. Overall, it was a decent book…

Neil McKinlay wrote a very poignant testimony of his life story growing up in Scotland in his book, From Mason to Minister: Through the Lattice. I learned a lot about that wonderful land, as well as Canada and Australia, because of his testimony. I appreciated yet again the drawing power of our Lord Jesus Christ as Mr. McKinlay shared his life with us. He also interspersed his book with his own poetry, and this lent a romantic air to this volume.

In the preface of From Mason to Minister: Through the Lattice, Mr. McKinlay explains how he did not write “the ordinary” of what is generally offered concerning Freemasonry. He doesn’t make a case against it or for it, but he tells instead his testimony and how he was drawn to becoming a Mason but then how he left it in 1990 as a result of his soul-searching for God and the Savior, Jesus Christ.

I appreciated the more gentle approach this author has taken with Freemasonry because it shows the confusion which is rampant about the belief systems of that organization and the mixture of Christianity with it. I also learned that there are some differences in other countries concerning Freemasonry and it was refreshing to get a glimpse of someone else’s life in this regard.

Mr. McKinlay’s publisher also wrote a note assuring us this was a helpful book because it does not attack Freemasonry but gives us assurance this book is, “…a reasonable explanation for how apparently godly men might have associated themselves with an organization now so widely associated with the occult.” (Gerald Christian Nordskog, page 188). I trust the Lord can speak through this gentle testimony to some within the ranks of Freemasonry, and my hope is that these men will turn to the Lord and forsake it as wholeheartedly and completely as Mr. McKinlay testifies he did.

I was expecting another Masonic exposé. I’ve certainly seen enough of those and I’m well aware of the problems with the Masonic religion as practiced by the more occultic members. However, this book is not about that. The Lord can use anything to save his sheep.

What I found was a delightful story about a man who was saved through the Masons. I can empathize with that having come out of occult roots myself. I first heard from the Lord [well before I met Him] that I was going to be saved through a reading of the yarrow sticks for the I Ching. Through my journey throughout the occult, I was protected and guided by the Holy Spirit until I ended up asking Jesus to take over my life. Nothing has been the same since.

In much the same way, Neil Cullan McKinlay was led and guided by the Holy Spirit through the more Christian parts of the Masonic training into a thorough study of the scriptures and an eventual saving knowledge of Jesus. The book is filled with delightful stories about his pets, and life in general. Neil eventually became a Presbyterian minister in Australia in his life’s journey from Scotland to Canada through Winnipeg to Australia.

It is a poetic and lyrical book. In most cases, I am completely shut down by this. But because I had promised to review the book I read it in its entirety. I’m glad I did. It is a gentle, graceful story about how the Lord loves us enough to save us no matter where we begin in our journey toward him. I enjoyed the read and I think you will also—especially if you like poetry and the more lyrical end of prose.

Do I recommend pursuing the occult to find the Lord? Of course not! But the Lord Jesus is never limited in His creativity.

This book is a poetic memoir of the author’s quest to “find the Truth and know the Living God.” Once a high-level Mason, Neil McKinlay offers firsthand insight into Freemasonry and its teachings, which inspired him to a deep Biblical study of “the Stone the builders rejected”—Jesus Christ. You will be uplifted as you follow his absorbing journey “through the lattice” to the discovery of his calling to ministry.

A captivating journey of courage through a world of secrets, soul-searching, and ultimate success, it is an intriguing and inspiring read from shadows to sunlight!

From Mason to Minister is a handsome volume. Pleasant to hold. Good-sized print. Clean, thoughtful design. My brother Neil is a writer. A wordsmith. He will lead many readers on enthralling, rewarding “cinemascopic” journeys through the deep glens and over the high mountains and towards the distant horizons of imagination. A sure-footed guide. And always the destination will be that bit nearer to our great and merciful God of perfect love, from Whom and through Whom and to Whom are all things.

It truly amazes me to learn how God leads His elect in various ways back to the great Jehovah Elohim without Whom no one can come to God. I heartily recommend this readable book.

His journey, seen “through the lattice” (Song of Solomon 2), is charming, engaging, informative, historical, and, most of all, Biblical. Neither an apologetic nor a polemic, it is unique and answers questions about a controversial subject. It is a book to be enjoyed.

I read a lot of books. Those that I seek most keenly, like pearls without price, are books like this, books that get me in touch with God. There is a sense (it seems to me) that only literature of this kind is actually important.

Written by a once-high-level mason, this book chronicles his journey to discover the Living God. The hot and often debated topic of whether the Masonic Lodges are a cult or not is openly discussed in light of the scriptures. I was very interested in this book as I have a Great Grandfather that was a high level Mason and Shriner. On his death bed he accepted Christ and renounced the Lodges.

I found this book to be excellent as a resource for Pastors and others to show those wondering about the workings and truth of the Lodges. In these pages the reader follows the journey of Neil Cullan McKinlay as he wades the vague fog of the Lodges into the true and redeeming light of true Christianity.

McKinlay does a sound job at showing in an unbiased way the difference between what the Lodge proclaims and what it actually practices and how these very things contradict the teaching of the Bible.

An intriguing journey into the shadowy secrets of the Lodges, this book guides readers through the secret rites and teachings of a closed cult. I found it rather ironic that the Bible presented to McKinlay upon his entrance into the Lodges was the very book that led to his acceptance of Christ.

A great easy read. Very informative and very biblically sound. If you are interested in understanding just how far off this lodge is from true Christianity, this book will clearly answer your questions.

McKinlay’s narrative is one part personal testimony and another part Scottish anecdote. We learn so much about his personal likes and desires, including his love of nature, his poetic gifting, as well as his desire to follow Christ, and eventually his ordination as a minister in the Presbyterian Church of Australia.

What is most important about McKinlay’s chronology is that he shows that God is so very much interested in the person and that our “life story” is the means by which God draws us to Him no matter where we’re at. The seeking heart will always find God, and there isn’t a place we can go or be where He won’t come searching for us. 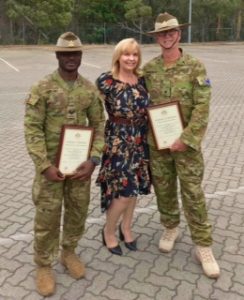 L to R: Jefferson Williams Kollie, Mrs. Neil McKinlay, and Author Neil McKinlay. Jefferson and Neil received promotions in the Australian Army on the same day, Neil to major, and Jefferson to corporal.—December 7, 2018

Neil Cullan McKinlay was ordained as a minister of the Presbyterian Church of Australia in 1998. He became an Australian Army Chaplain in 2008. He is married to Dorothy, and they have three grown-up daughters: Jennifer, Nina, and Fionna. Neil is Canadian born but was raised in Scotland. Dorothy and he migrated to Canada from Scotland in 1980 and began a family. They moved to Australia’s sunny shores with their three daughters in 1990 and have resided there ever since.

Neil writes for a monthly Australian writer’s magazine called FreeXpresSion. He self-published a collection of these writings in a book titled The Song of Creation and Other Contemplations.

His big brother Fearghas MacFhionnlaigh is a constant encouragement to his faith and was instrumental in the writing of From Mason to Minister. 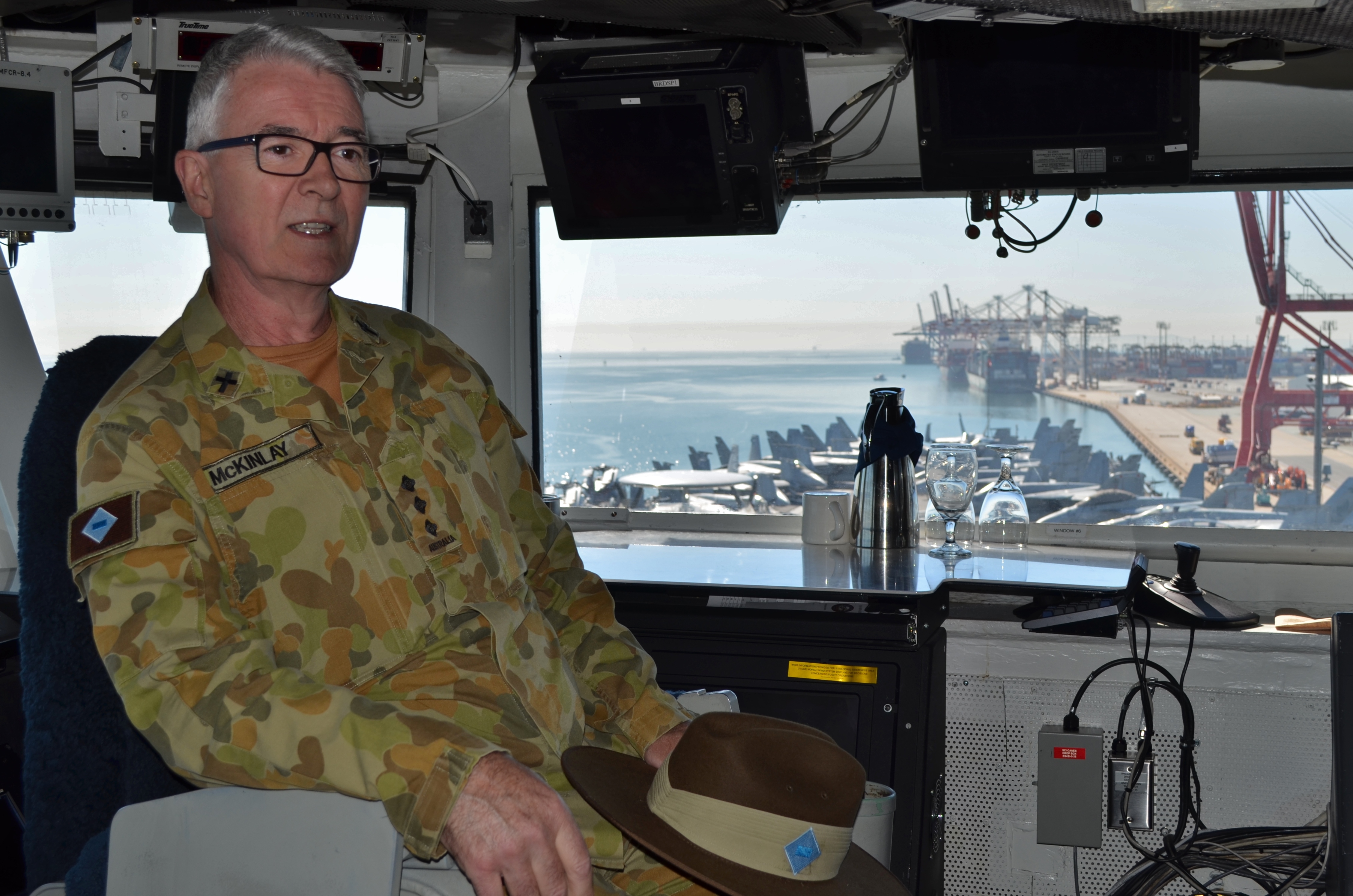 Author Neil McKinlay, serving as a Chaplain to the Australian Army, enjoyed meeting up with the crew aboard the aircraft carrier USS Ronald Reagan while docked in Brisbane, July 24, 2017. Here Neil enjoys the commanding view from the helm as he “pilots” the ship.

2 reviews for From Mason to Minister