101 Treasured Hymns with Devotions
Rated 5.00 out of 5 based on 1 customer rating
(3 customer reviews)

By Dino and Cheryl Kartsonakis

Renowned piano virtuoso Dino Kartsonakis has brought his love of sacred music to the task of selecting 101 of the best from the vast history of hymns. In this hymnal book, available with accompanying CD, these musical treasures are presented alongside devotions that expand on their themes, written by Cheryl Kartsonakis. On the CDs, Dino presents his musical interpretations of all 101 hymns. Sing and play, read, listen, and pray with Dino and Cheryl!

Walk into any Protestant church these days and you are likely to encounter a worship team that sounds a lot like a rock band. The musical worship will have a strong backbeat and simple, easy-to-follow repetitive melodies and lyrics.

We honor today’s young musicians and composers, and the love and skill they bring to musical worship, whatever their level of competence, because we know that the Lord hears their hearts. But can it be that in the pursuit of a new sound, an old treasure has been lost?

It can truly be said that if we are ignorant of history, we don’t know on whose giant shoulders we stand. Hymn Restoration celebrates the musical treasures of Christian history, going back as far as lyrics composed by Francis of Assisi in the year 1225 in the song, “All Creatures of Our God and King.” We bring you 101 of the best from the vast wealth of hymns going back centuries. You will immediately recognize the depth of the lyrics and the inspired beauty of the melodies.

Dino has recorded his stirring piano renditions of each of the 101 hymns in this collection onto a four-CD set that is available separately or with the hymnal as a book/CD bundle. What could be better than hearing Dino himself performing his own selections?

Dino plays his rich piano renditions of each of the 101 hymns in this collection on a four-CD set that is available separately or with the hymnal as a book/CD bundle. What could be better than hearing Dino himself performing his own selections?

Every hymn in the book is presented alongside a devotion and prayer that Cheryl has written, a chance to think more deeply about the hymns and apply their wisdom to your own life. These devotions also teach about the history of the hymns. We are indebted to the historians of hymnology and their books, some of which date back to the eras in which the hymns were written—historians such as John Julian and Ira Sankey, as well as the modern historians such as Robert Morgan and Kenneth Osbeck. Look for the references in the Notes section.

We hope that as you encounter these hymns and devotions you will be uplifted and encouraged in your faith. Music is indeed a special language that can touch us with a penetrating poignancy unique among human experiences. Sing and rejoice!

Be Still, My Soul
Be Thou My Vision
Beneath the Cross of Jesus
Blessed Assurance
Break Thou the Bread of Life

Child of the King, A
Come Thou Fount of Every Blessing
Count Your Blessings
Crown Him with Many Crowns

Fairest Lord Jesus
For the Beauty of the Earth

Hallelujah, What a Savior!
Have Thine Own Way, Lord
The Haven of Rest
He Keeps Me Singing (There’s Within My Heart a Melody)
He Leadeth Me
Heavenly Sunlight
His Eye Is on the Sparrow
Holy, Holy, Holy
How Firm a Foundation

I Am Thine, O Lord (Draw Me Nearer)
I Love to Tell the Story
I Need Thee Every Hour
I Sing the Mighty Power of God
I Surrender All (All to Jesus I Surrender)
In the Garden (I Come to the Garden Alone)
It Is Well with My Soul
Ivory Palaces

Jesus Is All the World to Me
Jesus, Lover of My Soul
Jesus Loves Me
Jesus Paid It All
Jesus Saves! (We Have Heard the Joyful Sound)
Joyful, Joyful, We Adore Thee
Just a Closer Walk with Thee
Just As I Am

The Last Mile of the Way
Leaning on the Everlasting Arms
Let the Lower Lights Be Burning
The Lily of the Valley
Love Divine, All Loves Excelling
Love Lifted Me
The Love of God

A Mighty Fortress Is Our God
Moment by Moment
My Faith Looks Up to Thee
My Hope Is Built on Nothing Less
My Jesus, I Love Thee

Near the Cross
Nearer, My God, to Thee
Nothing But the Blood

O That Will Be Glory
O Worship the King
Oh, How I Love Jesus
The Old Rugged Cross
On Jordan’s Stormy Banks
One Day!
Open My Eyes, That I May See

We sing hymns not because they are old, but because they are great and contain so much of our theology. So, a big thanks to you, Dino, for helping to save a very important part of our Christian history and may God bless you, my friend, in this special effort.

There is nothing like the classic hymns of the Christian faith, which are so rich in doctrine, to lead us in worship. They inspire us to rightly revere Almighty God as we lift our voices and declare the truth of who He is and all He has done for us. I am grateful to Dino for compiling this great collection of hymns and for his tireless work in exalting the name of Jesus.

This book is dedicated to our Lord and Savior Jesus Christ,
with thankfulness for the music He placed
within the hearts of these excellent hymn composers,
and for our ears to hear and hearts to worship.

My soul doth magnify the Lord,
and my spirit hath rejoiced in God my Saviour.
For He hath regarded the low estate of His handmaiden: for, behold, from henceforth all generations shall call me blessed.
For He that is mighty hath done to me great things;
and holy is His name.
And His mercy is on them that fear Him
from generation to generation.
He hath shewed strength with His arm; He hath scattered the proud in the imagination of their hearts.
He hath put down the mighty from their seats,
and exalted them of low degree.
He hath filled the hungry with good things;
and the rich He sent empty away.
He hath holpen His servant Israel,
in remembrance of His mercy;
as He spake to our fathers, to Abraham,
and to His seed for ever.
Luke 1:46–55 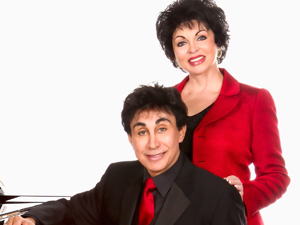 Dino Kartsonakis is known as one of the world’s premier pianists, a title aptly given. From Carnegie Hall to the honor of performing inside the Tower of David, Jerusalem, Dino has captured the world with his unique talent, stellar performances, and exceptional showmanship.

Kartsonakis is a Grammy Award winner for playing on the soundtrack of the movie The Apostle. He was nominated for “Chariots of Fire,” and is an eight-time Dove Award winner and Tele Award winner forMiracles, filmed at David’s Tower in Jerusalem.

Dino’s talent and performance prowess all started at the tender age of three, when he sat at an upright piano and played the hymn “At the Cross” that he heard that morning at church. He grew into his talents and later studied music at the King’s College, piano at the Julliard School in New York City, at the Munich Conservatory in Germany, and the Conservatory of Fontainebleau in France, where he studied under the famous concert pianist Arthur Rubinstein.

Cheryl has sung and Dino has played concerts in his famed style in such places as Russia, Japan, China, and Israel, to name a few—also Carnegie Hall, the Hollywood Bowl, Lincoln Center, and many other prestigious venues nationwide, performing for many dignitaries. He toured extensively in Europe under the auspices of the United States Army Special Services. He was featured in evangelist Kathryn Kuhlman’s I Believe in Miracles television show on CBS Television Network, working with Kuhlman for seven years.

Aside from touring the world, Dino has made countless network television appearances since the age of sixteen, including the highly rated talk show The Dino Show, produced and hosted by Dino and Cheryl. For over twenty-five years they wowed audiences in over two hundred countries with a variety of celebrity guests as well as performances by Dino and Cheryl.

Most recently, Dino had the distinction of playing at Israel’s 70th Birthday Celebration Concert with the Jerusalem Philharmonic Orchestra the night before the U.S. Embassy opened in Jerusalem, with Pat Boone singing and serving as MC.

Cheryl Kartsonakis has performed as a vocalist for the past twenty-five years, entertaining audiences around the world alongside her husband. She is also the designer of many of the gorgeous costumes and sets in the Kartsonakis concert extravaganzas.

Dino and Cheryl are not only world-renowned entertainers, but they are also husband and wife. Dino and Cheryl share two daughters, Christina and Cherie, and are grandparents to Cherie and her husband Steve’s daughters, Lauren and Alexandra.