By Bobbie Ames on February 16, 2017 in Publisher’s Corner

The New York Times called her the “First Lady of a Political March to the Right.” I called her my treasured friend of more than 50 years. I also called her my inspiration and motivation, as I learned so much through the decades about political action and the passion required to “hang in there” in the world of politics.

Phyllis Schlafly was a model, not just to me, but to women all over America. Her priorities: God, Family, and Country. She was stalwart in her Christian world view, which guided her passion for the Pro-Life movement. I dare not think of where we would be had she not championed that cause so early, so consistently, and passionately. The recent Republican National Convention passed the most conservative platform in decades, and she was right there to make sure that it was just so. Many delegates were there participating because of their relationship with Phyllis, who truly educated them over decades.

Phyllis Schlafly was an Educator of the First Order. Her Phyllis Schlafly Reports went monthly, for many decades, to grass roots activists as did her newsletter, the Education Reporter. There is no way to estimate the impact that she has had in every single state in America as an Educator.

When we were establishing the GOP in Alabama, Phyllis encouraged us to help establish Republican clubs for women in every county. With the leadership of Mary Ellen Miller, known and revered nationally within the conservative Republican camp, we made the great changes, though slowly. The contacts and skills of Miss Olive Spann of Chapman, Alabama, were a great boost throughout the state. I worked the Selma, Marion, and West Alabama area, and agreed to run for President of the State Federation. The progress was remarkable because all of us had grown up as Democrats, and had known nothing but that political, one party system. And of course, many people opposed the changes.

It was Phyllis, among others, who urged me to run for the Republican National Committee as Committeewoman from Alabama. I served from 1968-1972, and I learned that everything Phyllis had taught us about the D.C. establishment was true: the good and the bad. Her objective was to educate the grassroots, particularly women. Women shared her priorities of God, Family, Country, and their involvement was essential.

In 1968, she brought women from all over America to St. Louis, for a national conference, “The Eagles are Flying.” In our Southern Region Round-table portion of the conference, women from California, Ohio, Connecticut, Washington, D. C. and other states came in pure delight that the South was indeed “flying” to the GOP.

Every person went back home with a plan to engage others in the cause of Christian Liberty and American Patriotism. And Phyllis made sure through her travel, her publications, and staff, that we had the “schooling” to be effective. She was indeed, our example and guide.

She was born Phyllis McAlpin Stewart on August 15, 1924. Her mother was a teacher with two college degrees, and her father was a machinist and industrial equipment salesman. The family were always interested in culture and politics, and were active Republicans.

Phyllis attended Maryvillle College of the Sacred Heart, which is now Maryville University in St. Louis. She graduated Phi Beta Kappa in only three years, at 19 years of age. She accepted a scholarship at Radcliffe, and completed her Master’s degree in nine months. Some years later, she obtained a law degree from Washington University.

For a time, after college, she worked for a conservative think tank, now known as the American Enterprise Institute, and volunteered in several political campaigns. She met John Fred Schlafly, an attorney whose family had also been politically active, and conservative, and they married in October of 1949. They have six children, who have always been the top priority of the family.

She ran for Congress two times over her career, winning the primary the first time, but losing the race. The second try was not successful. She became active in leadership with the Daughters of the American Revolution, and President of the Illinois Federation of Republican Women from 1956-1964.

She and her husband, Fred, and his sister Eleanor, started the Cardinal Mindszenty Foundation, named for the Roman Catholic leader who was tortured by the Hungarian Communists. Throughout the years, she has alerted us to the invasion of Socialism and Communism over the world, and the dangers here in our own nation. She began a radio program in the early 1960’s which aired all over the state of Illinois.

Phyllis played a dynamic role in the Goldwater campaign. While his defeat was painful, she now had new contacts with thousands more women who shared her Christian worldview, but needed her education outreach politically, and educationally. These women understood the threats to our liberty and were eager to engage.

While national defense and defending our borders were a strong passion to her, there emerged a new threat from the growing feminist movement across America. Yet Phyllis discarded nothing from the Goldwater effort, but successfully simply repackaged it for the Reagan campaign. And you will remember that President Ronald Reagan praised her highly.

Phyllis accepted the leadership of STOP ERA, to do battle with the feminists. And STOP ERA, she did, for she had the enthusiastic support of women in every state, who saw the danger in ERA, and not protection for women, in this proposed so called Equal Rights for Women.

The founding of Eagle Forum followed the STOP ERA movement, and that organization, to this day, has been the glue that held the conservative women together with purpose and skills. Her 1964 book,

A Choice Not an Echo, has sold over 3 million copies, and has recently been updated and republished for today’s activities. We recommend it highly.

When the Supreme Court legalized Abortion in 1973, Phyllis made the Sanctity of Life, her number one issue. In my last conversation with her just a few weeks before her death, she told me that she had met with Donald Trump and that he had assured her that he is Pro-Life.

With all of her responsibility, and with two strong ministries to lead, she amazingly kept up her personal relationships with friends. We had a 50th reunion of our earliest graduates in late July, here in Montgomery. Phyllis sent a letter overnight, for distribution to those attending. Days later, she called me to ask how everything at the reunion went. She enjoyed the articles in the Alabama Gazette, and often wrote me little notes to encourage me to “keep on” writing. Her notes were always ones that lifted my spirit.

Her husband Fred, and her son, John, went to Alaska with my husband one summer to participate in his gold mining expedition at Dixon Creek where he had a camp. The gold mining didn’t make us wealthy, but everyone who went and participated enjoyed it tremendously and still relive those memories.

I had the joy of having one of Phyllis and Fred’s daughters Liza with us in Marion at Perry (County) Christian School for a year of high school. Phyllis was passionate about Christian Education, noting the sad decline in public education very early. She spotlighted our school ministry with a Phyllis Schlafly Report in 1972, titled, “It Is Better to Light a Candle.” This report went nationwide, encouraging Christians to start Christian schools, as well as alerting people to become informed on all matters of Education in their local schools.

Phyllis Schlafly was an example of American Patriotism that you rarely see today. She sacrificed her time, her energy, her resources, and she took a stand on every crucial issue. Her stands were supported by God’s Word on every moral issue of our day. And she stacked them all in the order of Scriptural mandates: God, Family, Country. Moral issues came first: Pro-Life, Religious Liberty, and the Sanctity of the Family.

Having her as a treasured friend and mentor, is one of the great blessings of my life. Paying tribute to her life and legacy is a privilege. I pray that Eagles will “continue to fly” in this nation taking the lessons from Phyllis’ life and ministry, guided by God’s Holy Word. 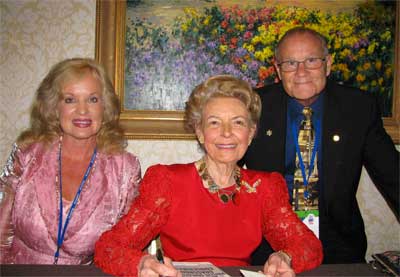 Mrs. Ames is a lifelong educator and advocate for the faith of Jesus Christ and liberty under law. In 1965, with her husband’s help, she co-founded what would eventually become Emerald Mountain Christian School in Montgomery, Alabama. The associated Hoffman Educational Center and Emerald Mountain School continue to serve the community and nation.

The original of this article appeared in the Alabama Gazette, Montgomery, Alabama, October 1, 2016, Vol 17, No. 1. Content and information copyright 2016 The Alabama Gazette Publishing, LLC.

Mrs. Ames was a brilliant lifelong scholar and educator, and advocate for the faith of Jesus Christ, with its liberty under law. For over fifty years, she taught in the classroom and administrated Emerald Mountain Christian Schoolin Montgomery, Alabama, founded with her husband in 1965. Mrs. Ames went home to her Lord and Savior on February 4, 2021.
View all posts by Bobbie Ames →
The Pro-Life Position Is the Pro-Woman Position
Gianna Jessen Testimony to the House Judiciary Committee of Congress