The Death Penalty On Trial

Taking a Life for a Life Taken

This book rigorously examines the controversy over the death penalty with clarity and cogency.

After Dr. Ron Gleason lays a thorough groundwork in history and law, he defines ethics philosophically, and then presents the Biblical mandate.

For the secular reader, he illustrates the positions of leading thinkers on both sides of the issue and examines their arguments down to the foundational premises.

For Christians—both for and against capital punishment—Dr. Gleason identifies the governing Scriptures and illustrates them with commentary from the confessional statements of the historic Reformed Church and some of the foremost voices in the Church today.

Proponents on both sides will find the issues in focus and the arguments framed for more meaningful discussion.

But as he homes in on the heart of the matter, the reader may find himself drawn persuasively to Gleason’s conclusion. This book rigorously examines the controversy over the death penalty with clarity and cogency.

Praise for The Death Penalty on Trial

Dr. Ron Gleason challenges both sides of the capital-punishment debate to know and articulate their positions more definitively. He avoids simplistic answers to this serious topic, recognizing that real lives are at stake. This book assesses and provides clear guidance for establishing and maintaining a safe and righteous society.
Dr. Dominic A. Aquila, President, New Geneva Theological Seminary Colorado Springs, CO
__________________

In a society that wants to deny a divine absolute standard, I find Dr. Gleason’s work both challenging and thought-provoking as he systematically provides the Biblical basis supporting his view on capital punishment.
Brad Dacus, Esq., President, Pacific Justice Institute, Sacramento, CA
__________________

Fuzziness on ethical issues is the bane of modern thinking. Happily, there is a voice of clear reason on the scene. Dr. Ron Gleason brings genuine moral clarity to the issue of capital punishment by his illuminating survey of American History. The reader will be most appreciative of Dr. Gleason’s masterful discussion of the objections to the death penalty. This book is a must-read for all lawyers, judges, and law officers.
Pastor Carl Robbins, Senior Minister, Woodruff Road Presbyterian Church, Greenville, SC
__________________

Speaking as an attorney and retired Marine Lt. Colonel, I find that Dr. Gleason systematically examines the historical background,  the objections, and the scriptures to present a compelling argument. Dr. Gleason’s book has settled the issue for me and I challenge those on both sides of the issue to read it.
Richard B. Hudson, J.D., Fallbrook, CA
__________________

Regardless of one’s own position on the controversial issue of capital punishment, Dr. Gleason clearly and effectively gives readers the
resources to work through this topic and equips them to discuss it with others. This powerful book will make a significant contribution to this topic. I recommend it for careful reading, study, and discussion.
Dr. Charles Dunahoo, Coordinator of PCA Christian Education and Publications, Atlanta, GA
__________________

The Death Penalty on Trial is a must-read for anyone questioning the ethics of capital punishment. Dr. Gleason’s treatment lays a foundation and framework of thinking that is essential for discussion. Many have mistakenly tried to defend erroneous positions because they have been misinformed by historical inaccuracies. This treatment to key historical documents is crisp, clear, and a valuable resource for anyone discussing this often emotionally-charged topic. Those dealing with current judicial reform need to read this to gain insight, not only to the issue of capital punishment, but also to those issues that surround (and often cloud) it.
Dr. John O. Bumgardner, Jr., First Presbyterian Church, Dillon, SC
__________________

Whether you are an abolitionist or believe in Biblical retribution, this is a must-read. Dr. Gleason tackles this controversial subject and disassembles all of the arguments against capital punishment in a logical and persuasive way. The most convincing argument in the book
is Dr. Gleason’s response to those who argue against capital punishment on the grounds that it is better for ten guilty men to go free, than one innocent man to be executed.
Charles M. Loopstra, q.c., Queen’s Counselor, Toronto, Ontario
__________________

At a time when sentiment and the spirit of the age too often characterize liberal ethical reflection, how refreshing it is to see careful Biblical reflection on one of the great issues of our day. Dr. Gleason not only articulates and defends the Scripture’s teaching on capital punishment, but also cogently responds to many of the contemporary objections raised. Accessible without being simplistic, this book should be in the hands of every individual seeking light on this controversial topic.
Dr. Guy Prentiss Waters, Associate Professor of New Testament, Reformed Theological Seminary, Jackson, MS 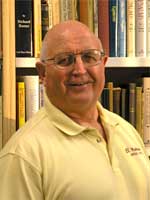 Dr. Ron Gleason, born 1945 in Charlotte, NC, earned his B.S. in Bus. Admin. at The Citadel in SC. After his time in the Army as a tank commander and instructor, he worked at Pfizer Inc. laboratories in Knoxville, TN. Then in 1973, he experienced his call to serve the Lord.

Back in the US, he earned a PhD from Westminster Theological Seminary in PA. He pastored a Dutch church in Holland till 1985, then pastored Bethel Canadian Reformed Church, Toronto till 1994. He is currently the pastor of Grace Presbyterian Church (PCA) in Yorba Linda, CA.

He lectures internationally and in the US, and has authored numerous books and articles. He publishes a weekly newsletter on ethics, entitled Ethos. Among his published and upcoming titles are children’s books, books on sports (baseball and wrestling), and his biography of the late Dutch theologian, Herman Bavinck (1854–1921), by the Presbyterian and Reformed Publishing Co. in 2009.

Ron is presently the Stated Clerk of South Coast Presbytery of the PCA. He is the President of California Exodus, an organization that encourages parents to remove their children from public schools.

Many of his articles can be found on his Web site at rongleason.blogspot.com.

On November 30, 2010, Dr. Ronald Gleason was informed that his book titled, Herman Bavinck: Pastor, Churchman, Statesman, and Theologian, was one of three books on the “Short List” for the 2011 John Pollock Award for Christian Biography.

3 reviews for The Death Penalty On Trial