The Battle of Lexington

A Sermon and Eyewitness Narrative

Have you ever wondered who fired “the shot heard round the world” that fateful morning of April 19, 1775? Who were those brave men who stood against the best-trained army in the world? This book contains Jonas Clark’s Sermon on the one-year anniversary and his eyewitness narrative of those events. None other but Jonas Clark could give such an accounting, for he was the pastor of those “embattled farmers” who stood their ground. Clark is herein giving an honest and accurate accounting of the Battle of Lexington. He is also giving testimony of the events of April 19 and answers the great question, “Who fired the first shot?”

There was no better-prepared place to inaugurate the first battle of the War for Independence than the little village of Lexington. For Pastor Clark “discussed from the pulpit the great questions at issue, and that powerful voice thundered forth the principles of personal, civil, and religious liberty, and the right of resistance, in tones as earnest and effective as it had the doctrines of salvation by the cross” (J. T. Headley, Heroes of Liberty: Chaplains and Clergy of the American Revolution, 21). “It was to the congregation, educated by such a man, that Providence allowed to be entrusted the momentous events of April 19, events which were to decide the fate of a continent—that of civil liberty the world over” (Headley, 23).

Today, the Battle of Lexington is little spoken of, for as a nation we have forgotten our history. We have neglected the heroes of our freedom and liberty. But there was a time when this day was remembered and odes were written to commemorate the occasion. Paul Revere’s Ride and the Concord Hymn are two examples. (See Appendix, pages 75–88.) Our history books no longer tell the true story of Lexington, so we must.

America is perishing for the need of preachers who apply God’s holy Word to every area of life including personal, civil, and religious liberty. The Church needs more pastors like Jonas Clark, a preacher who taught the great doctrines of salvation in Christ alone and the Biblical right to resistance, which gave his congregation courage to stand in the face of great odds. The Battle of Lexington should inspire every man, in all stations of life, to stand and make a difference.

To hear more about the virtues of this Patriot Pastor, author of The Battle of Lexington, please view this sermon by the late Dr. D. James Kennedy, Pastor, Coral Ridge Ministries, entitled “Will the Church Forget?” (Jump to 5:00 for commentary on Jonas Clark.) 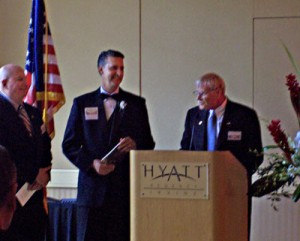 On the 233rd anniversary of the infamous Battle of Lexington (April 19, 2008) in Irvine, CA, Brad Dacus, President of Pacific Justice Institute, at its annual Celebration of Justice banquet. There publisher Jerry Nordskog (PJI Advisory Board) presented a signed copy of the book with Patriot Pastor Jonas Clark’s sermon to modern-day Black Regiment (Patriot Pastor) Ron Gleason of Grace Presbyterian Church (Yorba Linda, CA), who is also President of California Exodus, for his patriotism and commitment to Christ.

Rev. Jonas Clark
Pastor of the Church of Lexington

Jonas Clark was born on Christmas day, marking his life in obedience to Jesus Christ. He had six sons and six daughters, all but four living at the time of his death. Four of the daughters married clergymen. Rev. Clark graduated from Cambridge in 1752 and was ordained in Lexington three years later. In addition to being a fulltime clergyman, he was an industrious, hard-working farmer. He cultivated sixty acres of land, which he still owned at the end of his life.

As the pastor of the church at Lexington, he typically gave four sermons a week, written out and orally presented—nearly 2200 sermons in his lifetime. His preaching was vigorous in style, animated in manner, instructive in matter, and delivered with uncommon energy and zeal, with an agreeable and powerful voice. His sermons were rarely less than an hour, often more, and in theological opinions he was considered amongst the Trinitarians and Calvinists. The spirit and temper of his life were just what the Gospel was designed to produce. He was a Christian in the highest and best sense of the term, shown to be such by a long and exemplary life and a faithful practice of the virtues he had preached to others. He was considered a patriot of the most ardent and decided character. In addition to all this, he witnessed the first outbreak of the War for Independence at Lexington.

Writing a little less than a century after the fact, Rev. William Ware of Cambridge, MA wrote:

It can be regarded only as a singularly happy circumstance that, as Lexington was to be the place where resistance to the power of England was first to occur, and the great act of a declaration of war first to be made by the act of the people in the blood to be there shed, making the place forever famous in history, the minister of Lexington should have been a man of the principles, character, courage, and energy of Mr. Clark.

He was eminently a man produced by the times,—more than equal to them; rather a guide and leader. All his previous life, his preaching, his intercourse and conversation among his people had been but a continued and most effectual preparation for the noble stand taken by his people on the morning of the 19th of April, 1775. The militia on the Common that morning were the same who filled the pews of the meeting house on the Sunday morning before, and the same who hung upon the rear of the retreating enemy in the forenoon and throughout the day. They were only carrying the preaching of many previous years into practice.

It would not be beyond the truth to assert that there was no person at that time and in that vicinity,—not only no clergyman but no other person of whatever calling or profession, who took a firmer stand for the liberties of the country, or was more ready to perform the duties and endure the sacrifices of a patriot, than the minister of Lexington.

When the struggle actually commenced, the people were ready for it, thoroughly acquainted with the reasons on which the duty of resistance was founded, and prepared to discharge the duty at very hazard. No population within the compass of the Colonies were better prepared for the events of the 19th of April, than the people of Lexington; no people to whom the events of that day could more safely have been entrusted; none more worthy of the duties that fell to their lot; or who better deserved the honours which have followed the faithful performance of them. No single individual probably did so much to educate the people up to that point of intelligence, firmness, and courage, as their honoured and beloved pastor.

It was a heavy day to the pastor, who, on the retreat of the British, visiting the grounds directly under the windows of his church, found eight of his beloved parishioners lying dead, and many others wounded. Of the transactions of that morning and day, Jonas Clark drew up a narrative, included as part of his anniversary sermon, which we have republished in this book.

8 reviews for The Battle of Lexington