Society comes increasingly unglued. Are we doomed to relearn the lessons of God’s Providence the hard way? Perhaps not if we would study the exciting story of John Locke.

In Locke’s day, a turbulent age, Christian liberty struggled to emerge. Calmly navigating through extreme sectarianism and a deadly political jungle, Locke gave practical form to a Biblical civil model of government upon the ground of Life, Liberty, and Property.

Upon Mary-Elaine Swanson’s tremendous scholarship, John Locke: Philosopher of American Liberty will take you far in restoring the vision, purpose, wisdom, and resolve that founded the greatest freedom, prosperity, justice, and generous practical ministries the world has yet known.

May we once more know such a society and exceed it. Here is a great start.

Mary-Elaine Swanson has done an invaluable service for this and subsequent generations by resurrecting awareness and presenting an accurate knowledge of John Locke and his reasoning through an uncensored view of his life, writings, and incalculable influence on America. This book will help Americans understand the importance of Locke’s thinking for American constitutionalism today.

You will learn the real meaning of the “law of nature” as it was embraced in Colonial America and the separation of Church and State embraced in the Constitution. The Founding Fathers looked to Locke as the source of many of their ideas. Thomas Jefferson considered Locke as one of the three greatest men that ever lived.

Locke advocated separation of the state from the church and extension of religious toleration. Locke’s political writings were an enormous influence on America’s founders in the preservation of liberty and the establishment of representative government. Locke’s contributions to American liberty can clearly be seen interwoven in our colonial Declarations of Rights, paraphrased in our Declaration of Independence, and incorporated into our Constitution and Bill of Rights. The Declaration is born of the extensively studied and widely taught Treatises on Civil Government by John Locke. There Locke reasoned the very purpose of forming civil government is the protection of property, and that “life, liberty, and property (pursuit of happiness)” are not three separate rights but intrinsically one great and inalienable right he called “property”—which begins with the life of the individual, then his liberty, which is essential to his productivity, followed by the right to enjoy the fruits of his labors without fear that the government will confiscate his property. These inalienable rights are from God and legitimate government has no authority to take them away but is chartered in fact to preserve and protect liberty.

The book is divided into Five Parts and is fully footnoted and indexed:

Mrs. Mary-Elaine Swanson, author of numerous biographical sketches found in the appendix of The Christian History of the Constitution of the United States of America, was encouraged by Misses Verna Hall and Rosalie Slater of The Foundation for American Christian Education to pursue her interest in John Locke. The three of them knew that Locke had suffered many things at the hands of modern scholars, who in general selectively quoted Locke to support various ideas and philosophies alien to his thinking.

In addition to her many other scholarly endeavors, Mrs. Swanson spent years researching Locke and interacting with modern Lockean scholarship in order to prepare her subject. The reviewer remembers seeing evidence of this work in 1983 at a Pilgrim Institute conference held in Michigan, and at that time she had already been engaged in it for years.

The author writes as an historian to successfully defend Locke against charges of deism and atheism and to show that he was an orthodox Christian, a philosopher of free government, a theologian, a physician, a diplomat, an educator, a founder of the Bank of England, and a monetary reformer.

John Locke is written in a clear, concise, accessible style that maintains a good balance between the informal and the scholarly with extensive documentation. The biography of Locke shows how thoroughly he influenced the England of his day. Locke’s ideas came to be adapted by England in its ”Glorious Revolution,” as it moved from an absolute to a limited monarchy in which the king ruled with the Parliament. Owing to the wide circulation and study of Locke’s two Treatises on Civil Government in America, the Founding Fathers adopted his philosophy and embodied it, not only in the U. S. Constitution, but in local and state/colonial governments. In France, Locke’s ideas were abandoned with the grim consequences of the French Revolution. Read On»

What could 21st-century Americans—luxuriating in their BMWs, iPads, and largely unhindered freedom to worship God in their own individual ways—owe to a mild-mannered 17th-century Christian philosopher?

In terms of their physical, political, and religious liberties, just about everything.

In John Locke: Philosopher of American Liberty, the late Mary-Elaine Swanson has done such a thorough job of proving how the Christian political philosophy of John Locke so completely permeated the thinking of American colonists in the pre-Revolutionary War period, that for anyone to assert otherwise would expose to the world either his ignorance of history or a deliberate intent to defame one of the greatest thinkers of all time.

John Locke, the philosopher who gave the world the formula of “life, liberty, and property”; adviser to noblemen and to a king; sometime political refugee; hailed as the inspiration for the Declaration of Independence. Was he a Christian, or a deist?
Was he really the godfather of American independence, or a blind guide leading other blind men into a ditch?

In this meaty volume, the late Mary-Elaine Swanson (d. 2011) applied deep, extensive, and tightly focused scholarship to demonstrate “how important Locke’s political ideas were-and still are-to a free people” (p. 5). The book is also a yeoman effort to rehabilitate Locke in the eyes of Christians with whom he has fallen out of favor.

Notable among those was R. J. Rushdoony. Let’s get down to business, and try to decide whether Ms. Swanson has adequately answered his objections.

Mary-Elaine Swanson has done an invaluable service for this and subsequent generations in this historical biography of John Locke, correcting mischaracterizations of him from Deconstructionism and Academic Collectivism by presenting an uncensored view of his life, writings, and incalculable influence on America.

Thomas Jefferson said that Locke was among his “trinity of the three greatest men the world had ever produced.”

David Barton, from the Foreword

Mary-Elaine Swanson’s book on John Locke is a masterpiece of scholarship, made interesting and readable for the twenty-first century. Was Locke a founder of the unbelieving “Enlightenment”? Or was he a Christian apologist who promoted a Biblical view of government and society? Mary-Elaine’s fine book gives an authoritative defense of Locke and his Christianity.

“Because Americans generally are disconnected from their true national identity, this book should be in every home and every schoolroom.”
Carole Adams, PhD
President, Foundation for American Christian Education; Founder, StoneBridge School

Jerry Newcombe, DMin
Truth in Action Ministries (formerly Coral Ridge)
Author, The Book that Made America: How the Bible Formed Our Nation

“This book ranks among the ten most significant books of the decade. It should be read by every American pastor and activist patriot.”
Ben Gilmore
Founder and Director, ACH Study Groups, Citrus Heights, California

“This book should be read by anyone who is deeply troubled about the direction in which America is headed.”
Robert M. Damir, MBA, JD
Founder, Bridgemont Christian High School, San Francisco, California

“Locke was the fountainhead of American liberty and…he may yet prove to be the harbinger of a new day of freedom ahead.”
George Grant, PhD
Author, Educator, and Pastor of Parish Presbyterian Church, Franklin, Tennessee

Mary-Elaine Swanson (1927–2011), a historical researcher, educator, and speaker, wrote over 80 short biographies from original research in primary sources, in addition to her award-winning major biography, The Education of James Madison: A Model for Today. As Resident Scholar for American Colonial Studies she co-authored the earliest edition of The American Covenant: The Untold Story book and film with Rev. Marshall Foster of The Mayflower Institute, now World History Institute; then as vice-president of the American Christian History Institute, she developed a Study Guide to The Christian History of the United States of America, Vol. 2: Self-Government with Union by Verna M. Hall. Her many presentations and articles included “James Madison and the Presbyterian Idea of Man and Government,” published in Religion and Political Culture in Jefferson’s Virginia, “The Monroe Doctrine and the Hemisphere of Liberty,” and “The Law of Nature in John Locke’s Writings: A Break with Classic Natural Law.”

On May 19, 2011, Mary-Elaine Swanson went home to be with her Lord and Savior Jesus Christ. The Nordskog Publishing team will sorely miss this dear lady. She was a most excellent editor, scholar, and friend. Her influence is upon us all. 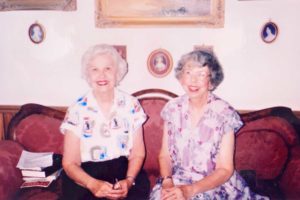