God gave man ten commandments. Every one of them is vital, in all ages. For only by observing them can man live a full life each week, maintain a happy marriage, and function well in his home, his job, and even in the world internationally.

God Himself is the Root of the moral law and perfectly reflects it. Salvation was never by the works of the law. For even before the Fall, man was to keep it out of gratitude for God’s great grace. Unfallen man kept the whole Decalogue. The Sabbath, marriage, the forbidden fruit, and the Tree of Life all reveal it. When man broke God’s law, he degenerated more and more—from the Fall to the Flood. The patriarchs kept it, and the prophets called man back to keep it. So, too, should we.

Christ never broke it. He said He had not come to destroy but to finish building the Law, and that not one jot or tittle of it would ever fail until heaven and earth themselves pass away (Matthew 5:17–18). Also subsequently, all His Apostles taught it. So, too, did the Early Church Fathers, King Alfred, Luther, Calvin, and even the great Jurist Sir William Blackstone. It is the very basis of the United States of America, and also of every other Common Law nation in the world. True Christians love to keep God’s Law. They shall always do so in Heaven. But all unsaved lawbreakers will end up in Hell.

Dr. Francis Nigel Lee is a man deeply devoted to God. His extensive research and study demonstrates the truth found in Ecclesiastes 12:13, that the fear of God and His Holy Law is what man is all about. Our society, and indeed our civilization, would greatly benefit by a better understanding of the intricate design of God for His creation. Sir William Blackstone in his Commentaries on the Laws of England said it most explicitly, when he stated: “Man considered as a creature, must necessarily be subject to the laws of his Creator, for he is entirely a dependent being.” I am happy to commend to your reading Dr. Lee’s work God’s Ten Commandments: Yesterday, Today, Forever.

A Note from the Publisher

This book is about God telling all peoples to live by His Word, His Laws, in every age, in every culture, from the beginning of creation to the end of time and for all eternity.

As publisher I am pleased that my friend, Dr. Francis Nigel Lee, provided his manuscript for publishing this important work. Through a scholarly rightly dividing of the Word of Truth, with more than ample Holy Scripture references, Dr. Lee demonstrates that the Ten Commandments (which summarize all of God’s Law) are for Yesterday, and for Today, and Forever.

In 1989 I first met Dr. Lee through Mr. Frank Gauna, my friend and member of my Southern California Constitution Education Committee, which was founded prior to the 1987 Bicentennial of the U.S. Constitution. Dr. Lee flew in from Australia for several speaking engagements, including our SCCEC all-day seminar the weekend prior to Thanksgiving in Chatsworth, California. He spoke on the subject of “Communists More Religious than Christians!” (recorded in his book Adventures with God, page 136), and we soon became lifelong but distant friends. Then once again in 1997 (page 175 of his book), Dr. Lee went on a speaking tour in the U.S.A., and we were privileged to host him at our George Washington/Patrick Henry Supper Club in Ventura, California, where he spoke about “Restoring the U.S. Common Law” and on “The American War between the States (Civil War).”

That same weekend my wife Gail and I invited Dr. Lee to our Sunday-evening home Bible class, where he gave the most interesting and passionate talk about his life with Christ and the power of forgiveness. In South Africa, his father had been murdered, and after the trial and conviction, Dr. Lee had the opportunity over a period of time to witness to his father’s murderer in jail and to see the man give his life over to Jesus Christ.

Born in England, Dr. Lee grew up in South Africa, emigrated to the U.S.A. and eventually settled permanently “down under.” He has preached well over three thousand sermons in Afrikaans and English, had well over five hundred articles published, and has nearly 200 books in print, totaling well over thirty thousand pages of text.

Dr. Lee has dedicated his book to former Alabama Chief Justice Roy Moore (now known as “The Ten Commandments Judge”) for his courageous stance in upholding the Ten Commandments. Judge Moore initially was thrust into the national spotlight in 1997 when he held his ground against a court order demanding that he remove a tablet of the Ten Commandments, which he had carved by hand and hung on the wall alongside his court bench in Etowah County, Alabama. Eventually this led to his placement of the famous 5,280-pound Ten Commandments monument in 2001 and his stance not to cave in to pressure from those who brazenly reject God’s Law as the moral foundation of our legal system. A highly respected constitutional scholar, Judge Moore served as the Chief Justice of the Supreme Court in Alabama from 2001 until he was removed from office for daring to refuse a liberal judge’s unconstitutional court order to remove a Ten Commandments monument from the State Supreme Court building. This was a historic and heroic stand for God’s Law, the Ten Commandments.

Judge Moore has shown himself to be a man of valor, integrity, and comprehensive familiarity with the original constitutional principles, and a stalwart defender of religious liberty. A West Point graduate, he served our country as a U.S. Army Company Commander in Vietnam before earning his Juris Doctor degree from the University of Alabama Law School. 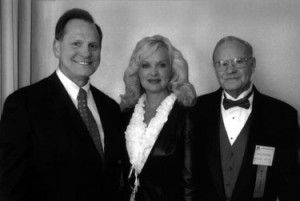 A tireless defender of individual liberties, Judge Moore has been honored by at least three states and dozens of civic organizations, receiving the “Christian Statesman of the Year” award, the “Bill of Rights” award, and the “God and Country” award. My wife, Gail, and I had a wonderful opportunity to meet Judge Roy Moore (and have our picture taken with him) at the Celebration of Justice Banquet of the Pacific Justice Institute, founded by Brad Dacus, at a gala in Orange County, California, in 2005, and Judge Moore was the honoree and keynote speaker. Both Dr. Nigel Lee and Judge Roy Moore are gentlemen and distinguished, faithful, and courageous servants of our Lord. 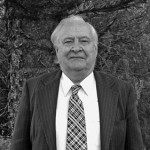 Dr. Francis Nigel Lee was an Advocate or Barrister (alias a Trial Lawyer) of the Supreme Court of South Africa before becoming a Minister and then pastoring congregations of the Presbyterian Church in America (PCA) in Mississippi and Florida. He was also: Professor of Philosophy at Shelton College in New Jersey; Scholar in Residence at the Christian Studies Center in Memphis, Tennessee; Academic Dean of Graham Bible College in Bristol, Tennessee; and then for twenty years Professor of Theology and Church History at the Queensland Presbyterian Theological College in Australia. Dr. Lee went to be with the Lord in 2012.
Read Jerry Nordskog’s Reflections on Dr. Lee