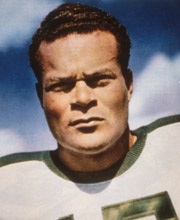 Steve Van Buren (father of Gail Nordskog) was voted the “Greatest Eagle of All Time” by the Philadelphia Eagle fans in 2007 during their 75th Anniversary of the National Football League Philly Eagles, has died at age 91 in Lancaster County, Pennsylvania last night August 23rd.

The Moving Van” “Wham Bam” “Supersonic Steve” and Blockbuster” were some of many tags given him during his years as a star running back crunching yards and touchdowns for the team.

He was the first Eagle football player to be inducted into the Hall of Fame in 1967. Van Buren played (after his college career at LSI when he was the #1 draft pick) from 1944 thru 1951 for the famed professional football team, the most revered of all the Eagles. His career was cut short due to an injury but he set numerous team and NFL records during those years.

Van Buren’s career was distinctive. He surpassed 1000 yards rushing twice, won the NFL rushing titles four times, and a rare “triple crown” in 1945 when he led in rushing, scoring and kickoff returns. He was a first-team ALL-NFL selection each of his first six seasons. He was selected in the very select group as one of the Top 100 professional football players of all time.

Gail Nordskog, wife of Jerry, is one of four daughters of Van Buren. She and her older sister, Lynare Pipitone, were referred to as “the girls” due to their close age and strong relationship. Lynare lives in Lancaster, PA and Gail in Ventura, CA.

Steve Van Buren answered to a lot of names during his eight-year career in the National Football League: “Wham Bam,” “Supersonic Steve,” “Blockbuster,” and several more. Translated, they all meant he was an exceptional football player.

To be sure, Steve’s pro career was distinctive. He surpassed 1,000 yards rushing twice, won four NFL rushing titles and a rare “triple crown” in 1945 when he led in rushing, scoring, and kickoff returns. He was a first-team All-NFL selection each of his first six seasons. Van Buren lined up as a halfback but played more like a fullback as the battering ram of a powerful Eagles squad that dominated the NFL in the late 1940s.

Philadelphia had never finished above fourth place until Steve came on the scene in 1944. That year they finished second, were runners-up two more years, won three straight divisional titles, and the NFL title in 1948 and 1949.

Van Buren provided the offensive punch in both championship victories. In 1949 title game against the Los Angeles Rams, Steve carried 31 times for a record 196 yards as the Eagles won 14-0. A year earlier, Van Buren rushed for 98 yards and scored the game’s only touchdown in the Eagles 7-0 title win over the Chicago Cardinals.

Born in Honduras, Van Buren was orphaned when he was very young and sent to New Orleans to live with his grandparents. He failed to make the high school football team as a 125-pound high school sophomore, but as a senior he played well enough to win a scholarship to LSU. In his senior season, Van Buren rushed for 832 yards. Encouraged by LSU coach Bernie Moore, the Eagles selected him as their top pick in the draft. It was a break for Van Buren and, for the Eagles, possibly their most fortunate ever.

Steve Van Buren was inducted into the Pro Football Hall of Famein the Class of 1965. In 1999, he was ranked number 77 on The Sporting News’ list of the 100 Greatest Football Players.

Check out his profile on NFL.com