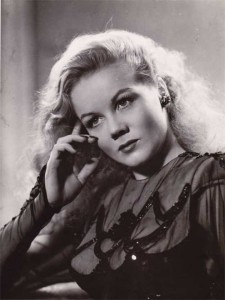 Gloria Louise Nordskog was the youngest in her family: sisters Ethelwyn (Wanda), Melba (Dona), Ruth, brother (Robert), and parents Daisy May and Arne (Andrae) Nordskog. The family resided in Santa Monica, Los Angeles, and Hollywood, where Gloria took dancing lessons and began skating at the Ice Palace and the Roller Bowl.

In 1938, she began touring the USA performing on roller skates. Skating Vanities was launched in 1942, featuring Gloria Nord at age twenty, the ballet-dancing pretty young blond on skates. “Her prowess earned her a roller-skating number in the 1944 Betty Grable movie “Pin Up Girl,” which made the petite, curvaceous Nord a real pin-up popular with the American GIs in World War II,” per the L.A. Times (1-7-10).

Gloria’s fame spread, as she became a skating star all across America. “Ms. Nord was known as ‘the Sonja Henie of roller skates,’ after the Olympic champion who starred in lavish musical ice-skating productions,” per the Washington Post (1-8-10). When Norway’s Henie won her first Olympic gold medal, Gloria was just two years young. She became a favorite and famous theatrical skating star for two decades in America, England, throughout Europe, and Australia.

Ice skating stardom began in Brighton, England, in 1952, when Gloria starred in the Ice Circus. She moved to London in 1953. In that year she was the first skater ever asked to perform in the prestigious Royal Command Performance in England. She skated at the London Coliseum and met Queen Elizabeth II in person. “And it was the most exciting night of my whole career,” per the Orange County Register (1-12-10).

Over the years, Gloria met royalty from England, Norway, Sweden, France, and other countries, and she met many movie stars. She was often featured in pictorial articles in newspapers and magazines, including the New York Sunday News, Look, Pic, Post, Colliers, the Saturday Evening Post, to name just a few. Gloria even made it into Robert Ripley’s Believe It or Not for doing ninety-six spins in one minute on her roller skates.

Twelve diamond rings were given to Gloria (and returned), but twice she married, ending in divorce. She had no children but has a big family today through her nieces Dorice Mabus and Carla Wales and nephews Brian Whiteside and Jerry Nordskog.

The last season of her life, after retiring from skating, Gloria Nord lived in Los Angeles, Newport Beach, and Mission Viejo, California, regularly entertaining and being an encourager to aspiring skaters, admirers, and friends from around the world.

Gloria Nord was a contemporary of Sonja Henie but did not have the family money to participate in the U.S. Olympics as did the Norwegian Ms. Henie. Gloria began skating when her brother, Bob Nordskog, made her some home-made roller skates during her early teens, and she took to roller-skating, as well as ice skating at the Polar Palace in Los Angeles while growing up in Santa Monica. Her artistic graceful style of skating (without lessons) naturally propelled her to stardom over the years.

Her career began and excelled initially in the USA, as she roller-skated across the country as the star of the Skating Vanities (see article below taken from a 1944 souvenir program, when she was only aged twenty-one). After several years in America, her stardom grew, and she was asked to go to England to skate in Great Britain’s ice shows. Once there, she soon became a national hero as the star of ice skating performances in London and elsewhere. This included being invited by the Queen of England to a special Command Performance before the Crown and skating elsewhere in Europe for many years as the ice skating beauty.

The following bio was taken from the 1945 “Skating Vanities” show program:

Lovely Gloria Nord, 21-year-old ballerina of “Skating Vanities,” has a double claim to fame. Not only is she acknowledged as the outstanding dance-skater in America, but she is also one of the country’s most beautiful girls. Her face and figure have adorned such national publications as The Saturday Evening Post, Look, Pic, the New York Sunday News, and others. She has won acclaim for her solo skating in the aptly-titled movie, “Pin-Up Girl.” And her photographs have been requested by American servicemen all over the world.

Like many another beauty of our day, Gloria was born in California. Even as a child, she showed marked dancing ability in the ballet which, as a matter of fact, was her original ambition. As a hobby, Gloria went in for ice-skating and was so good at adapting dance routines to ice that many urged her to become a professional ice-dancer. But Gloria wasn’t interested–dancing, she maintained, should be done on terra firma.

But fate had other ideas. One day Gloria went to the Hollywood roller rink with friends and, for the first time, donned roller skates. With no trouble at all, she began to dance on them. Soon she was giving exhibitions. Then Harold Steinman saw her, conceived the idea for “Skating Vanities,” and persuaded Gloria to change her mind about being a straight ballet dancer. This was not too difficult, for roller-skating held for Gloria an irresistible appeal which ice-skating had never had.