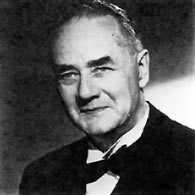 Mr. Andrae (Arne) Nordskog was active in local and national politics, as well as an entrepreneur and deeply involved in the music industry as a singer, teacher, promoter, manager and record manufacturer for some of his day’s greatest musical artists. He was the Vice Presidential candidate for the Liberty Party in the 1932 U.S. National Elections (against the victor FDR); and published a Los Angeles newspaper, “The Gridiron” where he fought the power brokers of the day in the battle for water in Southern California (as depicted in the movie China Town).

The following article is excerpted from the Hollywood Bowl Museum’s March 1986 book, “Sound Waves” about their second major museum display, a joint venture of Los Angeles County and the Los Angeles Philharmonic.

Andrae “Arne” Nordskog was an important pioneer in the musical history of Los Angeles, and played a prominent role in the use of the Hollywood Bowl as a site for concerts. His development of the first recording studio on the West Coast attests to his creative initiative, while the records themselves endure as testimony to a man of both musical and technological vision.

Nordskog began his career as a singer, joining the Seattle Standard Grand Opera Company in 1914. Two years later, he moved to Los Angeles to become the leading tenor for the Knickerbocker Light Opera Company and soon after, he opened his own vocal studios in Los Angeles and Santa Monica. In 1919, Nordskog organized the Santa Monica Bay Cities Philharmonic Society, which presented 120 to 200 musical events each year in Santa Monica, Ocean Park, Venice and Culver City. These activities eventually brought Nordskog to the attention of a civic committee of Hollywood’s leading citizens (including Cecil B. DeMille) which led him to becoming the general manager of the Hollywood May Festival Association. The first event staged by Nordskog for this festival took place at the Hollywood Bowl on May 15, 1920.

In August and September of 1921, Nordskog served as general manager of a series of five Sunday afternoon band concerts at the Hollywood Bowl. The guest artists for the series were Charles Wakefield Cadman, Carrie Jacobs Bond, Sol Cohen, Anna Ruzena Sprotte and Nordskog himself. These were the first concerts at the Hollywood Bowl at which admission was charged, and they set an important precedent the following summer, the Bowl became the site for ten weeks of “Symphonies Under the Stars” played by the Los Angeles Philharmonic.

Nordskog, a tireless innovator and impresario, created the first recording facility on the West Coast in 1921, using equipment designed by his father. On his Nordskog Records label, he featured numerous artists who were closely associated with the early history of the Hollywood Bowl and who are therefore included in this exhibit: Sol Cohen, Emil Oberhoffer, Sylvain Noack, Alice Gentle, Roland Hayes, Princess Tsianina, Margaret Messer Morris, Charles Wakefield Cadman, Ernestine Schumann-Heink, and Kid Ory. One of Nordskog’s most famous singers was one Cyclonic Eva Tanguay, who was paid the considerable sum of $1,000 for her vaudeville hit, “I Don’t Care.” By 1923, Nordskog had assembled a sizable “Catalogue of Recordings,” which remain today as a valuable document of the Hollywood Bowl’s early history.

The Nordskog Phonograph Recording Company was located at 1685 Ocean Avenue in Santa Monica in a building of approximately 10,000 square feet. It housed the recording studio which was about 2,000 square feet where the artists/performers made their records. The balance was used for the manufacturing operation. The recording machine was hand made by Frank Lockwood, Andrae Nordskog’s father-in-law. Very few purchased components were used and it incorporated many features that were unique in recording equipment during that period. This included the design of the horn, record processing, the diaphragm vibrator and the hand wound technical drive mechanism. In the early days of recording, the pressing was accomplished in New York. However, in the months prior to the closing of the Nordskog Phonograph Recording Company, all operations were performed at the western laboratory in Santa Monica. (See Wikipedia entry)

The recording procedures were as follows:

STEP 1: Casting of the molten wax and the basic shape of the wax disc which was approximately 11/4″ thick. It was with this wax that the actual vibrating needle cut the grooves into the wax,

STEP 2: The recording with the vibrating needle in the wax.

STEP 3: Copper plating the wax through electric conductivity in an agitating suspension-system; this would move the wax back and forth to keep the copper molecules suspended in the solution to give even distribution and in-depth penetration of the copper into the waxed grooves.

STEP 4: Reversing the previous plating operation-the copper disc went through a similar agitating electrolytic operation that plated away nickel to the copper.

These unique features involved in the Nordskog process and the equipment used credited Nordskog Records as being the finest in the world at that particular period in recording history. The original Nordskog building still stands in Santa Monica after half a century. 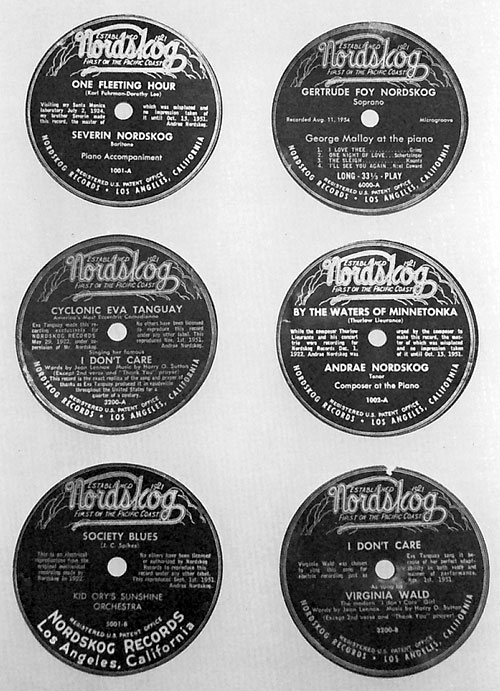 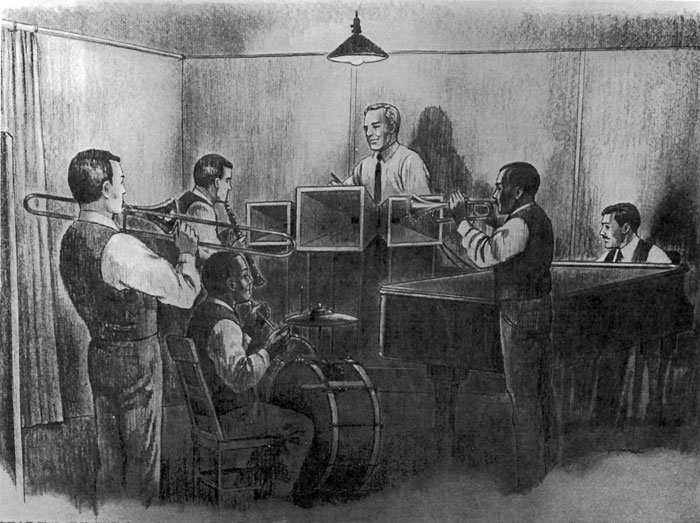 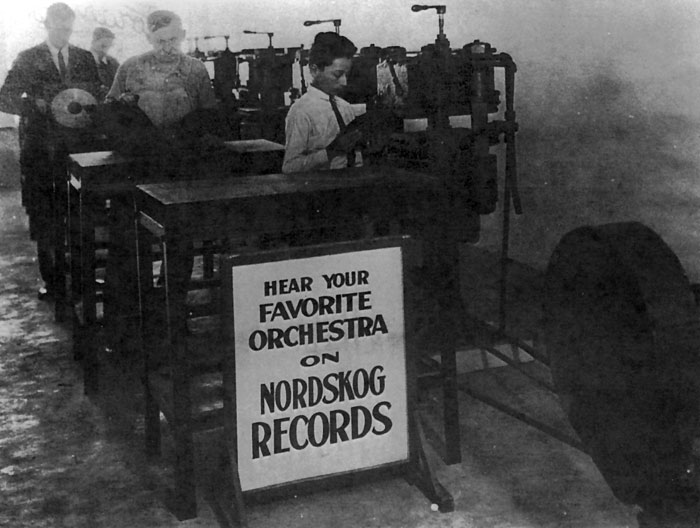 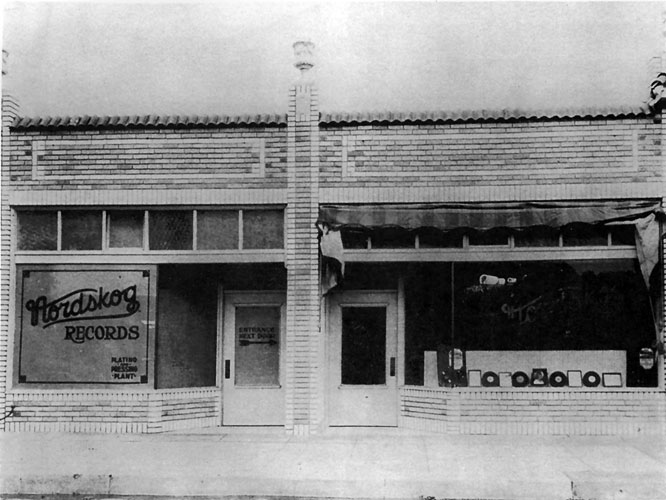 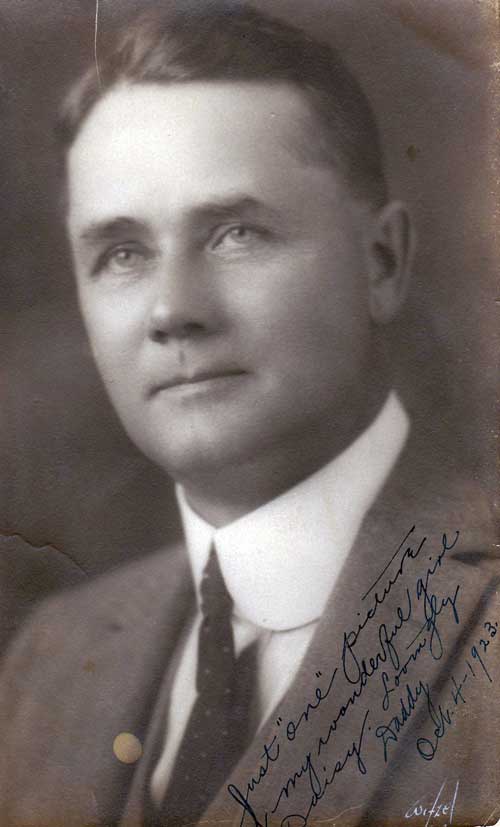