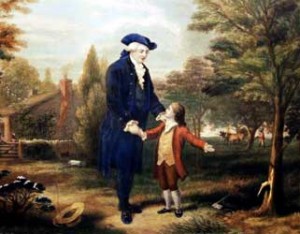 From the indications which we have of George’s earliest studies, the books presented to him by his father must have been carefully chosen with reference to their moral and religious tendency. The direction thus given to young aspirations, was towards that elevated character which his subsequent life exhibited; and the fact should not escape the attention of those parents who are desirous to train up their children in the paths of virtue and honour. “The child is father of the man.” The moral tendencies, good or bad, of childhood, are seldom eradicated in after life. It is with this conviction, and at the risk perhaps of being considered as detracting from the dignity of our subject, that we give some incidents of Washington’s life, which illustrate his father’s system of early training.

Mr. Weems, the Rector of Mount Vernon parish, relates the following anecdote of an old lady who had spent many years of her youthful days in the Washington family.

“On a fine morning in the fall of 1737, Mr. Washington, having little George by the hand, came to the door and asked my cousin Washington and myself to walk with him to the orchard, promising he would show us a fine sight. On arriving at the orchard we were presented with a fine sight indeed. The whole earth, as far as we could see, was strewed with fruit, and yet the trees were bending under the weight of apples, which hung in clusters like grapes, and vainly strove to hide their blushing cheeks behind the green leaves. ‘Now, George,’ said his father, ‘look here, my son! Don’t you remember when this good cousin of yours brought you that fine large apple last spring, how hardly I could prevail on you to divide with your brothers and sisters, though I promised you that if you would but do it, the Almighty would give you plenty of apples this fall?’ Poor George could not say a word, but hanging down his head, looked quite confused, while, with his little naked toes, he scratched the soft ground. ‘Now look up, my son,’ continued his father, ‘look up George, and see there, how richly the Almighty has made good my promise to you! Wherever you turn your eyes, you see the trees loaded with fine fruit; many of them, indeed, breaking down, while the ground is covered with mellow apples, more than you could ever eat, my son, in your lifetime.’ George looked in silence on the wide wilderness of fruit; then lifting his eyes, filled with shining moisture, to his father, he softly said, ‘Well, pa, only forgive me this time, see if I ever be so stingy any more.’”

It was also the purpose of Mr. Washington to create in his son an early love of truth, and an abhorrence of every thing like deception. He often talked with him on this subject, and that his lectures were not wasted, but sown on good ground, is evident from the following anecdote, which rests on the same authority as the one recorded above.

“When George was about six years old, he became the happy owner of a hatchet, of which, like most little boys, he was immoderately fond, and was constantly going about chopping every thing that came in his way. One day in the garden, where he often amused himself, he unluckily tried the edge of his hatchet on the body of a beautiful young English cherry-tree, which he barked so terribly, that I believe the tree never got the better of it. The next morning, the old gentleman, finding out what had befallen his tree, which, by-the-by, was a great favourite with him, came into the house, and with much warmth asked for the mischievous author, declaring at the same time, that he would not have taken five guineas for his tree. Nobody could tell him any thing about it. Presently George and his hatchet made their appearance. ‘George,’ said his father, ‘do you know who killed that beautiful little cherry-tree yonder in the garden?’ George was taken by surprise, and for a moment staggered under the question; but he quickly recovered himself, and looking at his father with the sweet face of youth brightened with the inexpressible charm of all-conquering truth, he’ bravely cried out, I can’t tell a lie, pa, you know I can’t tell a lie; I cut it with my hatchet.’ ‘Run to my arms, my dearest boy,’ cried the delighted father, ‘run to my arms. Glad am I, George, that you killed the tree, for you have paid me for it a thousand fold! Such an act of heroism in my son, is worth more than a thousand trees, though their blossoms were silver and their fruits the purest gold.’’’

Such lessons, communicated in such a way, it is not easy to eradicate.

An excerpt from the book by John Frost, Pictorial Life of George Washington: Embracing a Complete History of the Seven Years’ War, The Revolutionary War, the Formation of the Federal Constitution, and the Administration of Washington (Philadelphia: Charles J. Gillis, 1847), 17-18.

A photo-facsimile of this historic book in a beautiful hard binding has been republished by Whitehall Press and American Vision, 2009. This new version is available from Whitehall Press.

2 Responses to George Washington, the Apples, and the Tree