‹›
Nordskog Publishing seeks theologically well-grounded writing designed to encourage believers beyond mere personal salvation toward individual purpose and responsibility to Christ, to make a greater difference in this world. Thus we demonstrate the hope that lies within us by taking every thought captive in every area of life. All of life is thus inherently evangelical, every human activity. We either self-consciously serve Christ’s free and just kingdom through responsibility for life’s relational and economic institutions, or we by default give those institutions over to the pagan sinner. The world should be able to see the difference between the wheat and tares, the sheep and goats. The foundations for the Gospel and Great Commission matters. If the foundations be destroyed, what can the righteous do?
— Psalm 11:3

To the majority of those who have reflected deeply and written about the origin and nature of the universe, it has seemed that it points beyond itself to a source which is non-physical and of great intelligence and power. Almost all of the great classical philosophers — certainly Plato, Aristotle, Descartes, Leibniz, Spinoza, Kant, Hegel, Locke, Berkeley — saw the origin of the universe as lying in a transcendent reality. They had different specific ideas of this reality, and different ways of approaching it; but that the universe is not self-explanatory, and that it requires some explanation beyond itself, was something they accepted as fairly obvious.

…But as for me and my house, we will serve the LORD.

Ring Out the Truth 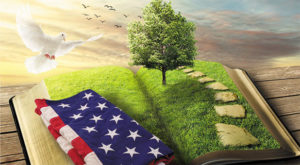 If there is one thing Jerry and Gail Nordskog desire, it’s to fulfill Christ’s Great Commission (Matt. 28:18-20). But instead of living as missionaries in another country, the Nordskogs equip believers with biblical truth through their company, Nordskog Publishing, based in Ventura, California.

Their aim is to publish “meaty, tasty and easily digestible biblical treasures.” To do this, the company publishes in the areas of theology, church history, politics and U.S. history. Along with fiction and nonfiction for adults, the Nordskogs also publish some children’s books. The subjects may be “meaty,” Jerry said, but “you don’t have to be a theologian to read our books.”